This class has been an overall good experience, but much more difficult than I anticipated at the beginning.  I found many of the readings difficult to get through, though I did enjoy some of them.  Maybe part of my issues came from the particular course load I had this semester.  While I knew that I had trouble getting through older works like the ones we looked at in class, when these readings were combined with the other readings I had, it was nearly impossible to get everything done.  I think I will have to plan my course loads better in the future.

The most interesting part of the class to me was learning the context and history surrounding the texts we were looking at.  Even when I didn’t necessarily enjoy reading a particular work, it was interesting to go into class and learn about the plague, bedlam, conduct literature, and other similar topics.  I love history and that is one thing that kept me looking forward to this class.  I also found myself motivating myself to read by looking at the texts as little windows into the past.  I found it easier when I did that.

Of our readings, I think that the selections from The Newgate Chronicles were my favourite.  I also enjoyed A Journal of the Plague Year.  I found both of these works interesting from a historical point of view and found both of them easy to read.

My least favourite was probably Pamela because of the length and repetitiveness, though I understand that it is important to read to understand the later readings.  It wouldn’t make much sense to read Shamela without the context of Pamela (even though I do think that technically Shamela could stand on its own).  In order to analyze Shamela and Anti-Pamela fully, we must know the context and Pamela is a big part of that.

The genre of conduct, or courtesy, literature is one with a long history, longer even than I would have thought.

The so-called “first conduct book” – The Maxims of Ptah-Hotep from Ancient Egypt.  It focused on advising young men on how to behave in various situations.  However, The Maxims are not exactly what we think of when we think of conduct literature.

After the middle ages, conduct literature began to focus more on women.  There were still conduct books for men, but the majority were about teaching young women how to behave.  This rise in conduct literature for women overlaps with Frances Burney’s life and had a huge impact on her works.

In her lifetime, and after it, writers were already beginning to satirize the writing in these conduct books.  These books present one way of being a proper woman, and it is usually the most already socially acceptable way.  The writers that satirized these works, like Mary Wollstonecraft and Jane Austen, were questioning the idea that there is a right way to be a woman.

Here is a link to an article by the British Library on a conduct book that was contemporary to Frances Burney, covering its connection to Jane Austen. 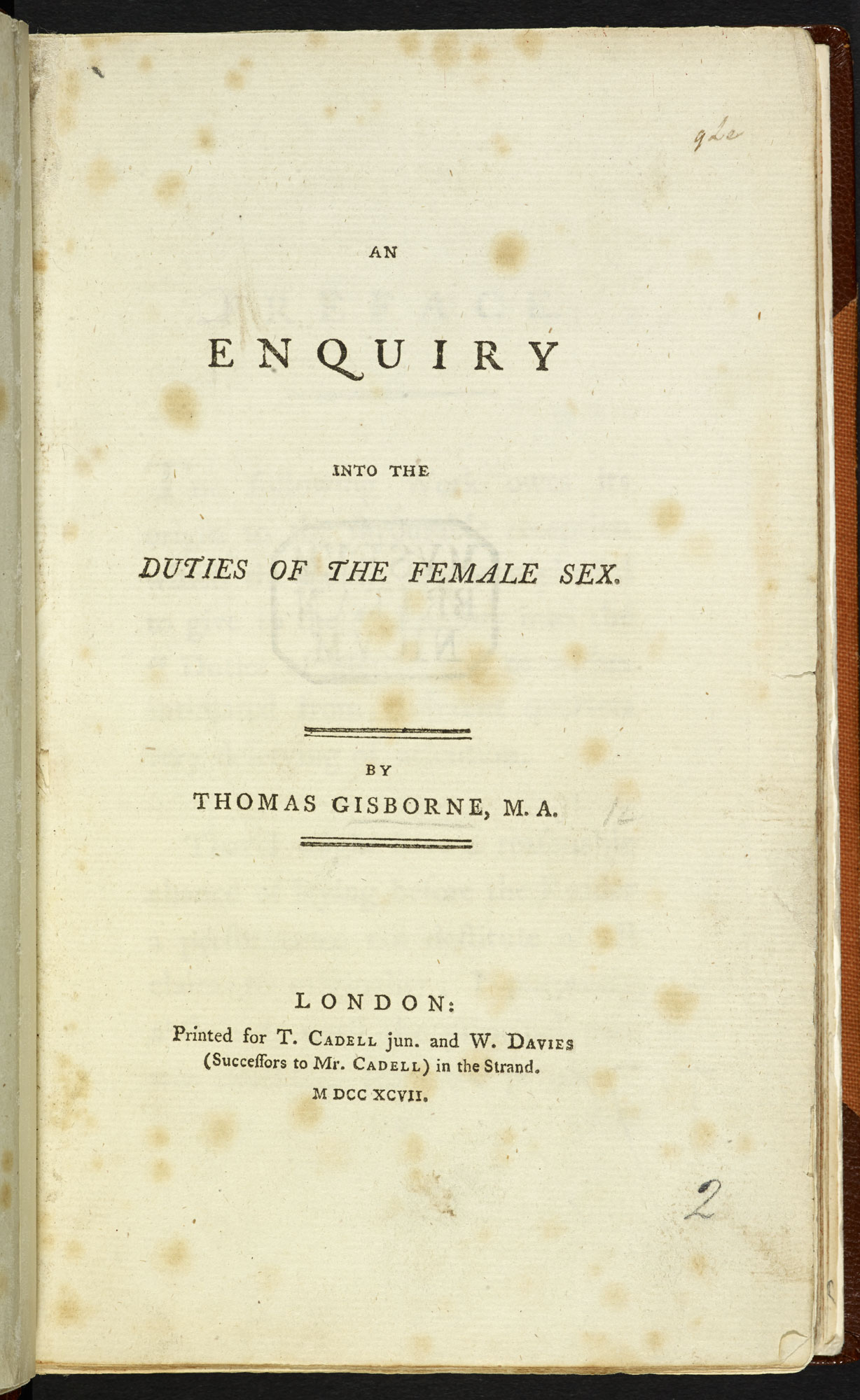 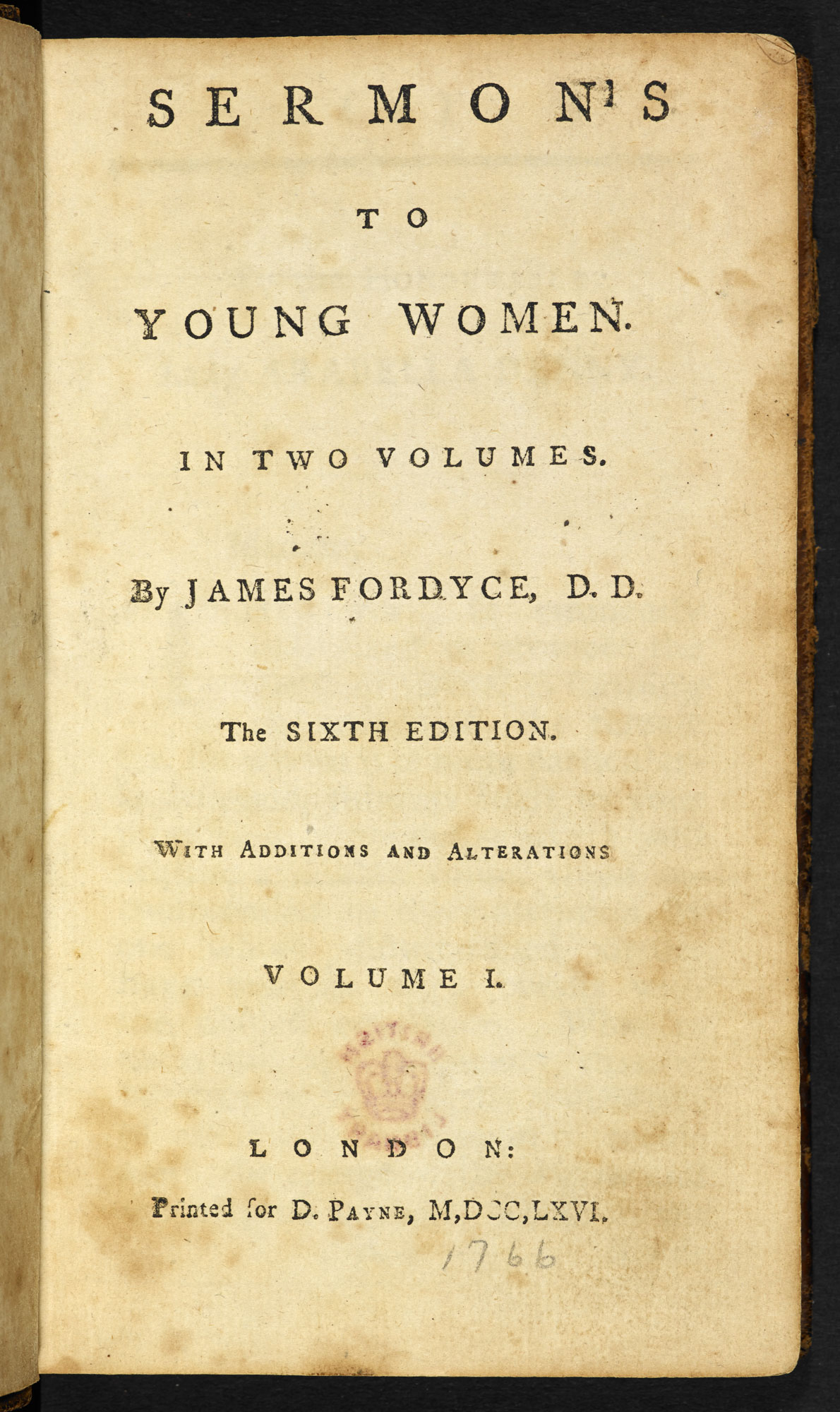 Ashley, Kathleen M, et al. Medieval Conduct Literature: An Anthology of Vernacular Guides to Behaviour for Youths, with English Translations. Published for the Medieval Academy of America by University of Toronto Press, 2009.

So far I am enjoying Evelina and definitely finding it easier to read.  I am not as far along as I had hoped I would be by now, but what I have read I have enjoyed.  The language and form are getting closer to modern and it is not such a struggle to parse every sentence, however, I am still struggling with content.

Just as Dr. Jones explained in class, manners are very important in this novel and personally, I am having trouble keeping up with all the dos and don’ts of the time.  I was glad to have the brief warning she gave in class about the etiquette of dances, without that I’m sure I would have been completely lost.

I have to disagree with what Julie said in class about the fact that Evelina herself is also confused makes it easier for the modern reader to understand.  While I think this is true to an extent, I find myself as confused as Evelina.  I find the writing style enjoyable and easy to get through, but I have to stop every once in a while to try and figure out exactly what is going on.

I knew that this would be an issue coming into the class, but I feel I underestimated exactly how much cultural stuff would go over my head in these readings.  It is very interesting to be brought into a whole new world that you understand nothing about, but it can also be very, very frustrating.

After class yesterday, I have been thinking about The Man of Feeling and particularly about the reason that the story was told from such a distance.  I think that this distance, like we said in class can give the reader a better view of the whole situation, not just what Harley is thinking at any given time.

I also think that this distance, telling the story as a found manuscript with missing pieces, can also give it a sort of mythic quality.   It is not just a story of a man who felt too much and died because of it, it is a story that has been passed on from person to person.   Even though we are reminded that it is a manuscript multiple times, it is still something that was found out in nature, something that we don’t know the origins of.  Especially since pieces are missing, even though we know they are missing because they were used as gun wadding, it makes the story feel older, like it has always existed and we are getting the remnants of a long tradition.

I was actually surprised by how much I enjoyed Shamela.  I love satire and comedy and while I found this over the top, it was very entertaining.

From the very first page, it is immediately obvious that this is a parody.  Even someone who had never heard of Pamela would understand that Fielding was mocking something, or someone, in this story.

It is interesting to see what moments Fielding picks up as particularly absurd or comical.  Shamela around 50 pages (including footnotes) and my edition of Pamela is 533 pages long.  Fielding has really cut the fat, which I appreciate.  Even though Shamela is substantially shorter, Fielding is really able to make his point and drive it home, while still writing about many of the more important events in Pamela.

We talked in class about how Richardson went on and on, repeating the same – or similar – events over and over.  This drastic cut in length could be a reaction to that.  It could also be that Fielding wanted to get his response out as quick as possible and thought that he had made all his points.

I find it interesting how Shamela ends after the marriage.  We talked in class about how Pamela was interesting because the reader actually gets a look into married life, no “and they lived happily ever after,” it explores what married life is like.  Unlike other novels of the time that end with the marriage.  Shamela doesn’t get a happily ever after either, but it is because Shamela cheats and is kicked out.  Where Pamela’s end is a reward (at least in the eyes of contemporaries), Shamela is punished.

One aspect of Pamela that does not have to do with the plot, is it’s form.  I found myself really enjoying the letter aspect of this book.  Even though, as we discussed in class, Richardson sometimes gets away from himself, and the letters are not exactly realistic, I thought it was a very interesting way to tell a story.

Surprisingly, I didn’t find the more egregious moments (i.e. when Pamela was writing in the first person as though Mr. B was trying to assault her while she was writing a letter) took me too much out of the story.  Obviously, it could have been handled better, but Richardson was trying to get across a sense of urgency and suspense, and I think that overall, the letters achieved that goal.

Despite being kind of clunky at parts, and not always fitting into the form he set out for himself, Pamela tells an effective story, and it does it only through letters.  This is a tough task, and yet we still get to learn a lot about the characters, setting, and plot.  It has all the key parts of a novel, while being told in this interesting, restrictive way.

I wish more current day authors explored this form, there is so much new media that could make it interesting.  A current day romance, told through texts, emails, messages on social media, etc, now that’s something I would read! (Though it would probably get dated pretty quickly)  Do any of you know of modern (or, more modern) epistolary novels? I would love to get my hands on one.

Reading Pamela in the current day, especially in the current climate with movements like #MeToo taking up so much of the cultural zeitgeist, is a very interesting read.  From the way it is framed, and even just from the title Pamela; or, Virtue Rewarded it is obvious that Pamela is supposed to be in the right, praised for her actions, and rewarded for her strength of character and virtue.  And, she is in the right – she’s fifteen and an older man, her boss, is making advances on her.  This should be horrifying to modern audiences.  The difference between contemporary and modern reactions comes from the end of the novel.  While contemporaries see her as rewarded in her marriage to Mr. B, it is difficult for us as modern readers to see it as anything but awful.

Erin, in her blogpost about Pamela, made an interesting point about the way that we interpret the information we are given as readers.  Everything we know about Pamela comes from her letters, which she is sending to her parents.  And perhaps she is not telling them the whole truth.  Whether the real truth is that Mr. B’s behavior was actually worse, or that Pamela didn’t actually mind the advances, we cannot know.

Regardless, she is still a child and the relationship contains massive power imbalances, age, class, gender, and the fact that she is his servant, all play into a relationship that I don’t think any modern reader would be quick to call a “reward.”